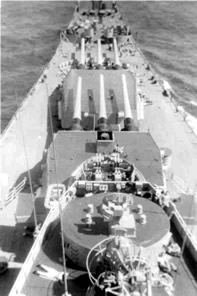 USS Washington (BB-56)
She fought in both the Atlantic and Pacific theaters in WWII, but she was probably the only battleship to lose an admiral overboard (Rear Admiral John W. Wilcox, Junior, USN) who was lost at sea in 1942. Read about it here, along with the rest of Washington's history.

The Navy Memorial Foundation
Full information about the memorial in Washington DC.

The United States Navy
The Navy's official site filled with news, answers to frequently asked questions, facts and photos. If you're thinking of joining up for another hitch, try the navy's recruiting site, chock full of flashy graphics and swooshy sound effects. Who knows? Next week you may be at sea again.

Haze Gray & Underway
A vast personal web site touching on all navies, not just the U.S. Navy, which clearly shows some passion for the subject.

Veterans Administration
Read all about your benefits.

TogetherWeServed
For current and former serving Members of the United States Navy, TogetherWeServed is a unique, feature-rich resource enabling Naval personnel to re-connect with lost Shipmates, share memories and tell their Navy story